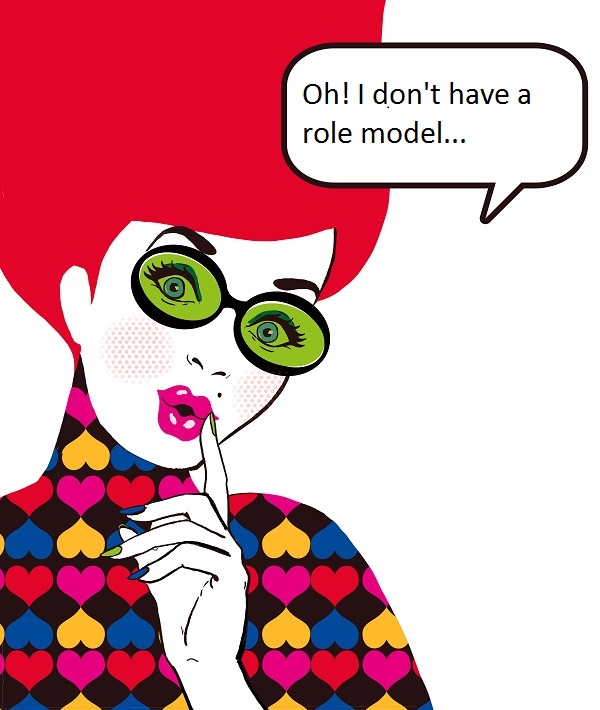 Everyone is talking about how finding sponsors, mentors, and role models is a key step on the road to winning the career rodeo. I can’t argue with the advice, but for a lot of us, there’s a big hitch: actually finding a suitable role model.

Maybe you feel as though you are the only person “like you” at the table. Or maybe there are people somewhat like you in the role you are in (or the one you aspire to), but they aren’t modelling a style you admire or that would feel natural for you. Or maybe you want to do something that hasn’t even been done before so there isn’t anyone out there wearing shoes that look like the ones you want to stand in one day.

Admittedly, that’s a tough place to be in and it can be confusing, disorienting, and even lonely. Go ahead and lick your wounds…but make sure it’s for a finite period of time only. Then get back in the saddle. While you may be thinking this doesn’t sound like very compassionate advice, putting a time limit on wallowing can be an act of self-love. Staying out of the game too long can keep you in a negative cycle of repeating the thing that’s hurting you the most (whether it be criticism, an outcome you didn’t want, etc.). We now know enough about how the brain works to understand that internal repetition – going over and over something we don’t like – can create a negative superhighway in the brain toward unhelpful thought patterns that ultimately limit what we see as possible. So giddy-up; back in the saddle is where you want to be.

Once you are back in action, consider this: there are teachers everywhere. Can you widen your view on who might be doing something in a way you admire? Look for teachers in people in different roles that have common elements with your role, or people who might do a few things exceptionally well, even if the rest of their style isn’t your cup of tea. What is it about their approach that draws your attention? What did they do masterfully in an interaction you witnessed? How did they produce a key outcome? How do others respond to them and why? What can you learn from observing this person?

It’s easy to get into all-or-nothing thinking when trying to identify possible role models, meaning that if someone isn’t completely perfect, or if they do a few things we can’t stand, we dismiss them entirely. Try to be on the lookout for the things people do that you appreciate or admire as opposed to focusing on their shortcomings. You might be surprised at what you start to notice and at what you can learn from the people already in your midst.

If, after scanning and re-scanning the possible candidates, you’re still coming up with the big zero on your list of potential role models, start looking for what I call “reverse role models.” Ask yourself, who are the people who are doing such a feeble job, or who are perhaps achieving results but in such an appalling way that you’d like to pretend they don’t exist? They can be teachers, too. I’ve learned some of my most powerful lessons about how I don’t want to lead by watching truly terrible leaders. If you have to work with a clown, make the most of it by learning something (while planning your exit strategy).

The final piece for exploration and discovery is you. Is it possible for you to be your own role model? What happens if you decide you are the prototype for how you will be in the role you want to play? I’m not saying it will be easy but it might be a smart route for you. I recall a time in my career when a reorg landed me in the engineering division of a large software company. For those of you who know me, you’ll appreciate the outright hilarity of this situation. In any event, I was struggling to figure out how to fit in and stand out at the same time; what to do with myself in meetings where I was the only woman and the only non-engineer present; and how the heck to compete in end-of-year evaluations where I would be measured against “the other engineers” (ahem, the ones who actually wrote code).

Following the well-meaning but misguided advice of a (male engineer) friend, I took to dressing and acting like the obvious role models: I donned hoodies, jeans, flats; I talking about things being orthogonal, exponential, or off by orders of magnitude; I made sure to take on a pensive scowl while listening to others; I could go on but I imagine you get the picture.

I tried this life hack for a while and, yes, it was utterly ridiculous. And also not very creative. When I finally let go of this experiment and became my own role model (both externally and internally) instead of trying to fit a mold that was all wrong for me, things got a lot easier and a lot more comfortable for me, and probably for others around me, too. I also saw my path in a way that hadn’t been as obvious when I was busy pretending to be someone else. To do that, I had to get one simple point: there is no one driving the “you bus” but you. No one else knows where you’re trying to go, which route is best, or even when you’re off course. Only you can know that.

Of course, this doesn’t mean every employer will (or even should) celebrate all aspects of who you are, that you don’t have plenty to learn from others, or that there aren’t contextual considerations that have a part to play in how you show up. It does, however, mean finding the right fit is a two-way street; that’s part of the process of choosing where to apply your talents. I’m curious about your experiences with (and without) role models. What’s worked for you, what experiments have you tried, and where have you been your own best role model?

Kore Koubourlis is a leadership coach and consultant. You can learn more about working with Kore here. If you like what you’ve read, why not share this post with your pals?