I woke up this morning to Lena Dunham cataloguing several decades of failed Halloween costumes in Lenny, the new edgy newsletter she puts out with Jenni Konner.  I had a “me too” moment as I recalled my own early experiences dressing up for Halloween.  Naturally, these included a long line of ballerinas, cutsie witches, and glamorous movie stars à la Ginger f 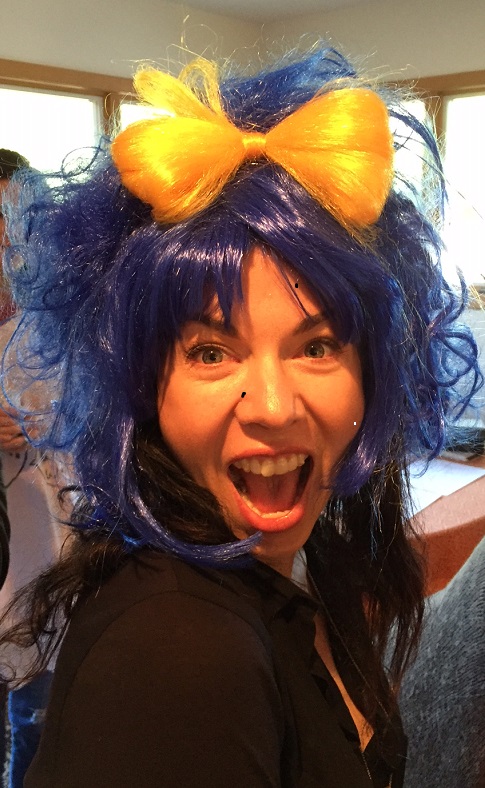 rom Gilligan’s Island, like many women who came of age in the 70s.

The first “original” costume I recall wearing was in the 5th grade, and it rivals Dunham’s worst gaffe.  My mother, the brains behind the operation, thought it would be clever to send me to school dressed as a streetwalker.  (Utter fail, Mom, though I do appreciate your early version of daring greatly.)

Fast forward many years to a different occasion for fun with costumes: professional life.

Fast forward many years to a different occasion for fun with costumes: professional life.  An early experiment with work dress-up was presented in my first job in Big Law.  When I started, it was like Halloween all over again.  For women, the code was skirt suits, nylons, closed-toe shoes, no bare arms, and so on.  Me and the rest of that year’s crop of fresh-faced associates dressed up in our scary costumes every day as we readied to slay dragons and impress partners.  We complained bitterly about the dress code (particularly me as the bevy of pastries that was once a standing feature at every law firm function caught up to my thighs, rendering the nylons all the more personally offensive).

The truth crept up on our merry band of newbie attorneys, though.  We found that, when we were wearing our costumes, we felt more confident, we controlled our impulses, and we generally conducted ourselves the way you would expect people who look like attorneys to conduct themselves.  Before we knew it, we were confessing to each other that there seemed to be a positive correlation between costume-wearing and the skillfulness we could bring to our roles.

But then just a few years later, seduced by the lack of formality at a tech job, I relapsed.  While I flirted with flip flops and faded jeans at work, the impeccably turned out and senior-most woman in the department shared this simple advice: dress like the people who have the job you want.

Now, this woman’s advice was aimed at creating an external impression of readiness for that coveted promotion, and there’s nothing wrong with that,* but I’m interested in something different here:

What happens on the inside when you change something on the outside?

What happens when you intentionally try on something that is attractive but unfamiliar to you? When have you altered something as simple as what you wear to work in order to light up or activate something in you that may have seemed absent, hidden from view, or out of reach?  What undeveloped qualities do you want to bring out and why? and what effect might this have on your performance and your possibilities?  I’d love to hear about your experiences and ideas.

*In earlier posts, I’ve written about Camouflage, essentially dressing in disguise, or going undercover, at work in order to play a role or stay in an organization that isn’t a natural fit; you can read more about that here.